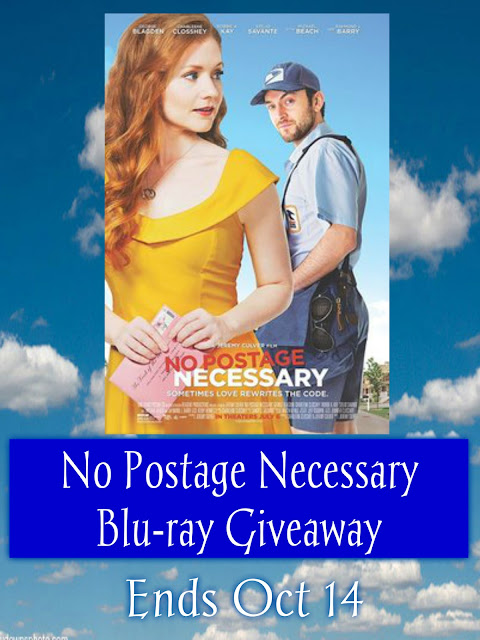 Hot on the heels of its trailblazing Blockchain release, Two Roads Picture Co. have announced that indie dramedy No Postage Necessary will be available on Blu-ray and DVD October 2, 2018. An ardent tribute to love and redemption, No Postage Necessary is “a sweet and heartfelt movie” (Mind on Movies) to which audiences can immediately relate, suggesting no one is as good nor as bad as we think and that we can chose to change our own destiny. The Blu-ray comes filled with behind the scenes bonus content, while both the DVD and Blu-ray editions feature the music video for film track “Talk About Love” - performed by No Postage Necessary star Charleene Closshey.

Directed by Jeremy Culver (Radical Kindness) and starring George Blagden (Les Misérables) and Charleene Closshey (An Evergreen Christmas), No Postage Necessary is “stunning in its sincerity,” and “exudes a simplicity and quiet authenticity” (The Independent Critic). The film was shot in Tampa, Florida, the filmmakers' hometown, on Kodak 35mm film and is a unique reflection of the Gulf Coast city and neighboring communities with an Americana vibe “as good as your granny’s apple pie” (Irish Film Critic).

Wrong decisions seem apparent for Sam (Blagden), a convicted computer hacker, whose single, jaded and barred from using the Internet. Forced to crash on his brother's couch, he makes ends meet by working at the local Twistee Treat and stealing mail while disguised as a postal worker. Then, a single pink envelope changes everything. Handwritten by a heartsick Josie (Closshey) to her late husband and fallen Marine, the tender missive awakens something in Sam. Desperate to be worthy of such love, he conspires to meet the beautiful, young war widow, longing to become a better man. As the two grow closer, she warms to the idea of a new chance at love, but not before Sam's past comes knocking in the form of an FBI agent looking for missing bitcoins.

BONUS FEATURES EXCLUSIVE TO BLU-RAY
● “Talk About Love” Music Video - featuring Charleene Closshey
● Behind the Scenes - An up close and personal look at the making of this wonderful film with its Cast and Creatives, including discussing the groundbreaking use of blockchain technology in its distribution.


To Enter Complete This Form To Get As Many Entries As Possible: