THE SCHOOL OF FRIENDSHIP IS OFFICIALLY OPEN!
SEASON EIGHT OF MY LITTLE PONY: FRIENDSHIP IS MAGIC PREMIERES SATURDAY, MARCH 24 ON DISCOVERY FAMILY 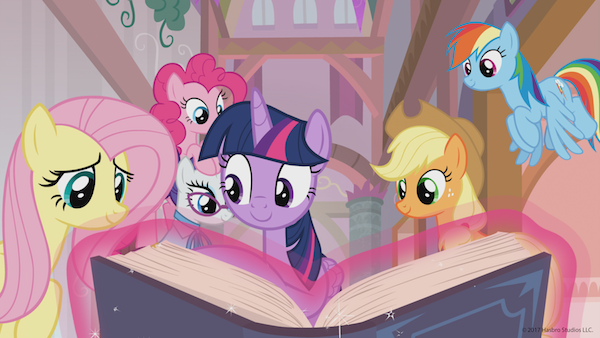 (Miami, FL) - Calling everypony (and creature) in Equestria -- Twilight Sparkle’s School of Friendship is in session! On Saturday, March 24 at 11:30a/10:30c, Discovery Family premieres the eighth season of MY LITTLE PONY: FRIENDSHIP IS MAGIC with 26 half-hour episodes complete with seven original songs, new characters and tons of friendship! New episodes of the Hasbro Studios’ produced animated series will also stream live and on demand on Discovery Family GO, the network’s TV Everywhere app.

Following the events of “My Little Pony: The Movie,” in the back-to-back season premiere episodes titled “School Daze Part 1” and “School Daze Part 2,” the Mane 6 discovers that the Friendship Map has expanded to show the world outside Equestria. Through two exciting original songs, Twilight Sparkle learns that friendship needs to spread beyond the limits of the kingdom and decides to open her very own School of Friendship. But things come to a head when the new non-pony students ditch class on Friends and Family day, putting the entire school in jeopardy!

Leading up to the season eight premiere, Discovery Family celebrates all things pony by binging the most magical episodes from the past seven seasons during the PONY PALOOZA takeover beginning bright and early at 6a/5c on Saturday, March 17 and running all week long during the day up to the season premiere on Saturday, March 24 at 11:30a/10:30c. Revisit legendary moments throughout the series including the royal wedding of Princess Mi Amore Cadenza and Shining Armor, the crowning of Twilight Sparkle as a princess, the birth and “Crystalling” of Baby Flurry Heart, the origin of the Mane 6 cutie marks and classic guest appearances from “Weird Al” Yankovic as Cheese Sandwich, Patton Oswalt as Daring Do super fan Quibble Pants and William Shatner as Grand Pear.

Launched in 2010, MY LITTLE PONY: FRIENDSHIP IS MAGIC follows the magical Princess Twilight Sparkle and her trusted assistant Spike, who live in Ponyville in the enchanted land of Equestria, along with her colorful pony friends – honest Applejack, generous Rarity, kind Fluttershy, loyal Rainbow Dash and fun-loving Pinkie Pie. Together, they teach one another valuable lessons about the most powerful magic of all – the magic of friendship.

MY LITTLE PONY: FRIENDSHIP IS MAGIC is produced by Hasbro Studios for Discovery Family. Stephen Davis is the executive producer for Hasbro Studios. To learn more, go to www.discoveryfamilychannel.com, on Facebook at www.facebook.com/DiscFamily and on Twitter @DiscoveryFamily.

About Discovery Family
The leading television destination for families in the United States, Discovery Family is available in more than 57 million U.S. homes and is a joint venture of Discovery Communications and Hasbro. Discovery Family is programmed with an inspirational mix of family-friendly series and movies and Hasbro Studios’ popular animation franchises, including MY LITTLE PONY: FRIENDSHIP IS MAGIC, LITTLEST PET SHOP and the Emmy-winning TRANSFORMERS RESCUE BOTS. Families can enjoy their favorite shows anytime, anywhere through Discovery Family GO – the network’s first TV Everywhere app offering live and on demand access to your favorite Discovery Family series and specials. For 2018-to-date, Discovery Family ranks as the #1 most co-viewed kid’s network among Kids 2-11 watching with an Adult 18-49 in Total Day and Prime.