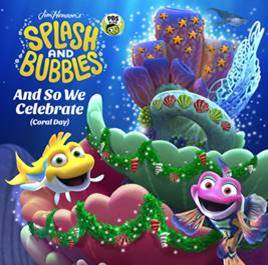 (December 1, 2017– Los Angeles, CA) – The Jim Henson Company, Herschend Studios, Varèse Sarabande Records, and The Cutting Edge Group announce the inaugural release of music from the hit PBS KIDS preschool series, Splash and Bubbles. The single, “And So We Celebrate (Coral Day)” will be available on all major digital retailers on December 1, 2017, in celebration of the holiday season and the all-new episode “Coral Day” premiering on December 11, 2017 (check local listings).

In “Coral Day,” it’s the holiday season in Reeftown and everyone is getting ready for Coral Day, a celebration of the wonderful coral that makes up their home. Splash, new to Reeftown and its traditions, wonders what he can contribute to the festival.

With themes of unity, family, friendship, and gratitude, the single written by award-winning songwriter Mike Himelstein and his long-time Henson collaborator Dena Diamond, features vocals from cast members including the show’s creator John Tartaglia as Splash, Leslie Carrara-Rudolph as Bubbles, Raymond Carr as Dunk, and Aymee Garcia as Ripple. “And So We Celebrate (Coral Day)” is a true holiday classic in the making.

The digital release will be accompanied by a special behind-the-scenes video of the recording in Studio A at the world-famous Henson Recording Studios, one of the music industry's top recording facilities known for iconic recordings like “Tapestry” (Carole King), “Rock & Roll” (John Lennon), “A Kind of Hush” (The Carpenters), and “We Are The World (USA for Africa)”.

Splash and Bubbles is a production of The Jim Henson Company and Herschend Studios. Created by John Tartaglia (Imaginocean, Johnny and the Sprites), the series is executive produced by Lisa Henson and Halle Stanford of The Jim Henson Company, Julie Phillips and Merrill Puckett Miller of Herschend Enterprises, as well as Tartaglia, Michael Shawn Lewis, and Jill Shinderman. The series is funded in part by the Corporation for Public Broadcasting and by the National Science Foundation (NSF). Splash and Bubbles airs daily on PBS KIDS and streams on Netflix.

Varèse Sarabande Records will release the Splash and Bubbles soundtrack album, including all of the songs from Season 1 in 2018. To download the single go to: http://smarturl.it/SplashandBubbles

ABOUT VARÈSE SARABANDE RECORDS
Founded in 1978, Varèse Sarabande is the most prolific producer of film music in the world, releasing the highest quality soundtracks from the world’s greatest composers. From current box office hits and top television series to the classics of Hollywood’s Golden Age, Varèse Sarabande’s catalog includes albums from practically every composer in every era, covering all of film history; from Bernard Herrmann, Alex North and Jerry Goldsmith to Alexandre Desplat, Michael Giacchino and Brian Tyler.