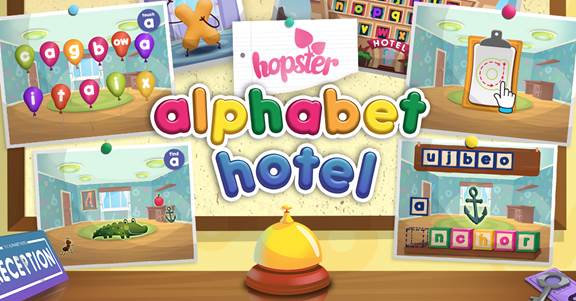 London, UK, November 13, 2017- Hopster, the preschool learning and entertainment app, today announced the launch of its phonics game, Alphabet Hotel. The new literacy game lets preschoolers discover how to recognize and write the letters of the alphabet.

Alphabet Hotel features four mini-games to help children discover letters and sounds from the English alphabet within each room of the hotel. After learning all the single letter sounds, children can then progress towards learning more complicated combinations and discover the digraphs (two letter sounds) to make up the majority of the 44 speech sounds used in the English language. The game will initially be free to play within the Hopster app.

Each of the four mini-games takes place in a different room of Alphabet Hotel. The games include:
-       Letter Trace - In this activity, kids are presented with a large letter, and shown how to write it using their fingers
-       Letter Find – Kids are presented with 11 balloons and are asked to pop the ones with the corresponding letter of the room on them. The balloons make the letter sound when the user taps directly on them and pops them.
-       Letter Objects – The user must tap three interior objects in the room that begin with the designated letter of the room. The name of the object will be announced to reinforce the letter object correspondence
-       Missing Letters – This activity requires children to drag and drop the correct letter into the missing slot to complete a word. This simple exercise is aimed at getting kids to start using the letters to build a word
“We wanted to focus on the importance of developing letter awareness during a child’s early years by introducing phonics,” said Hopster Head of Learning, Lelia Ingram. “Our goal is to prepare children in advance, so that by the time they enter school, they can learn to read and spell with ease.”
Alphabet Hotel will be housed initially on a learning hub on the main screen of the Hopster app, in Hopster School. Here, as well as trying the new game, kids will find a number of learning shows, all selected to further their understanding of sounds and letters. The shows include popular programming and original content such as:
-       Phonics School – This animated series teaches kids letter recognition, letter-sound association and shape tracing. The show makes phonics interesting by having likeable characters and creative storylines
-           Alphabet Stories – This show introduces little ones to the alphabet. Each episode teaches kids a new letter through a funny story that will set off their imaginations
-       Abadas – Ella the fox, Harry the hippo, and Seren the bat take kids on a magical adventure as they try to figure out the meaning of a new word in each episode
-       Reading Rainbow Storytime – Reading Rainbow makes children excited about reading and encourages them to pick up a book. They can discover an exciting new story in each episode, read by LeVar Burton
-       Signed Stories – Signed Stories brings together a collection of the best fairy tales accompanied by narration and sign language. These classic stories are perfect to encourage kids’ critical thinking and to build their vocabulary
-       Two Minute Tales – Based on the much-loved Grimm’s fairy tales, Two Minute Tales tells 10 different stories in a new way. This Hopster original production is designed to stimulate young minds and encourage children to discover the joy of stories, books, and reading
Alphabet Hotel will be free to try for a limited period on the Hopster app, found on the Apple App Store and Google Play for download. To find out more, check out www.hopster.tv

About Hopster​ – www.hopster.tv
Hopster is a beautifully designed app for the under-sixes, aiming to strike the perfect balance between learning and fun. For one low monthly subscription with no tie-ins, Hopster subscribers get access to one of the largest selections of kid’s TV shows in the UK with stimulating games, nursery rhymes, music and books from HarperCollins.
Over a million parents worldwide have now used the award- winning, safe, and ad-free app to keep their kids entertained and stimulated. Since launching in 2013, Hopster has topped the App Store charts in over 36 countries and was recently awarded 2016’s Best App of the Year on Apple TV in the UK and Ireland.
Hopster can be downloaded free from the App Store and Google Play and can be found on selected smart TVs such as Apple TV, EE TV, Freesat and Roku.