Based on the Classic Novel by Daphne du Maurier


Romance and Mystery Collide When MY COUSIN RACHEL
Arrives on Blu-rayTM, DVD and Digital HD August 29 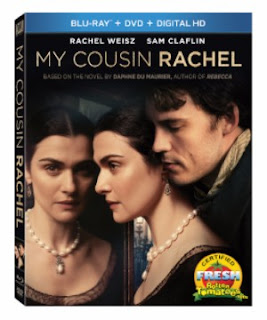 MY COUSIN RACHEL
Passion overtakes reason in this dark and layered romance – based on Daphne du Maurier’s classic novel – starring Oscar® Winner Rachel Weisz*. Believing his mysterious, beautiful cousin Rachel (Weisz) murdered the man who raised him, Philip (Sam Claflin), a young Englishman, plots revenge against her. But, despite evidence that Rachel might be a killer, Philip finds himself falling deeply in love with her in this visually stunning, tension-laced film.