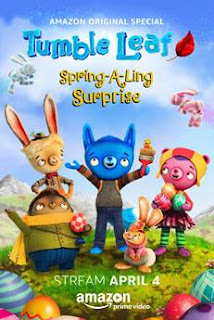 Tuesday, April 4, “Spring-a-ling Surprise,” an adorable new Amazon Original Special from the award- winning children’s series Tumble Leaf, is set to “spring” onto Prime Video for kids and families across the country!

In “Spring-a-ling Surprise,” everyone helps Bloom the bunny hunt for his lost eggs, which he plans to plant for a spectacular spring surprise, while Fig the fox uncovers many other signs of spring along the way!

Created by Drew Hodges (Community, SNL) and executive produced by Hodges and Kelli Bixler (The Roadents) of the award-winning studio Bix Pix Entertainment, Tumble Leaf follows Fig, a small blue fox, who lives in a whimsical land where he discovers adventure, friendship and love around every bend. The series reinforces the importance of learning through play, as it helps children understand the world around them. Tumble Leaf features the voice talent of Christopher Downs as Fig, Brooke Wolloff as Maple, Zac McDowell as Hedge, Addie Zintel as Pine, and Alex Trugman as Ginkgo.