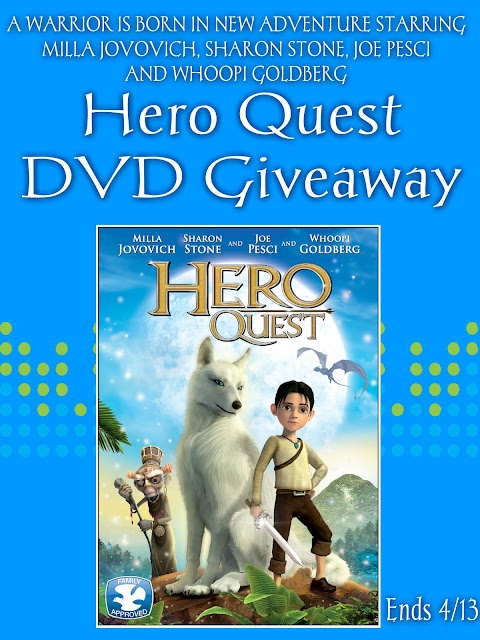 From The Writer Of The Lion King II: Simba’s Pride, Dove-Approved Animated Adventure Arrives On Digital HD And Video On Demand March 8 From Cinedigm

HERO QUEST follows the grand life journey of ten-year-old boy Savva (Jovovich) who is devoted to saving his mother and fellow village people after his home is taken over. Escaping into the woods, Savva befriends a majestic white wolf Angee (Chase) and together with the help of quirky forest friends Puffy (Stone) and Mosquito (Pesci), they embark on a fun-filled adventure to save the village. This colorful fairytale is all about caring for your loved ones, making true friends, growing strong and believing in a dream with all your heart.


Experience the magic of HERO QUEST with DVD special features that include the film’s official music video featuring Fadeev along with the film’s original Russian audio track.

About Cinedigm
Cinedigm is a leading independent content distributor in the United States, with direct relationships with thousands of physical retail storefronts and digital platforms, including Wal-Mart, Target, iTunes, Netflix, and Amazon, as well as the national Video on Demand platform on cable television. The company’s library of films and TV episodes encompasses award-winning documentaries from Docurama Films®, next-gen Indies from Flatiron Film Company®, acclaimed independent films and festival picks through partnerships with the Sundance Institute and Tribeca Films and a wide range of content from brand name suppliers, including National Geographic, Discovery, Scholastic, NFL, Shout Factory, Hallmark, Jim Henson and more.

Additionally, given Cinedigm’s infrastructure, technology, content and distribution expertise, the Company has rapidly become a leader in the quickly evolving over-the-top digital network business. Cinedigm’s first channel, DOCURAMA, launched in May 2014, and is currently available on iOS, Roku, Xbox and Samsung, with additional platforms currently being rolled out. Cinedigm launched CONtv, a Comic Con branded channel in partnership with WIZARD WORLD, on March 3, 2015. The Company’s third OTT channel, DOVE CHANNEL, launched on September 15, 2015 and is a digital streaming subscription service targeted to families and kids seeking high quality and family friendly content approved by Dove Foundation.

Disclaimer: I received a sample for my honest opinion. No monetary compensation was offered