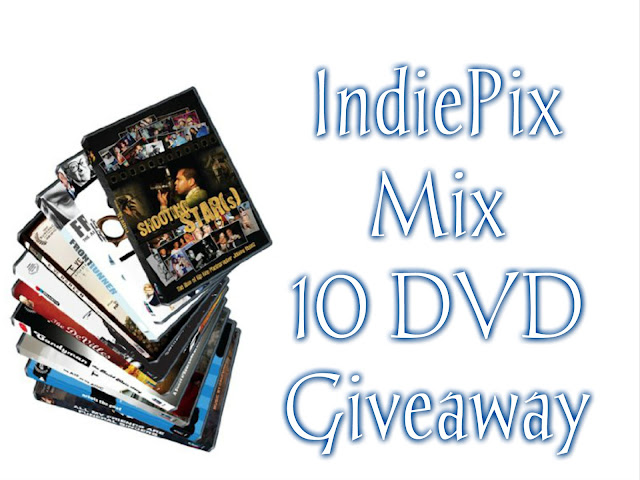 This holiday season, give the gift of indie film with INDIEPIXMIX 10, a specially-curated collection of award-winning gems from leading arthouse distributor, IndiePix Films.

Since 2004, IndiePix has scoured festivals the world over for the most memorable and compelling films across every genre, as well as the freshest and most original new voices in cinema.  From Iranian artist Shirin Neshat's feature-length debut, the Golden Lion-nominated WOMEN WITHOUT MEN and Paola Mendoza's triumphant ENTRE NOS to Ondi Timoner's Sundance Grand Jury -winning documentary, WE LIVE IN PUBLIC, IndiePix continues to carve out an innovative niche all its own by distributing some of the most lauded, creative and poignant films in the marketplace.

INDIEPIX MIX 10, specially-priced at $59.95srp, offers an intriguing blend of drama, comedy and documentary.  For doc aficionados, there's a wide range of festival favorites - from the powerful THE AXE IN THE ATTIC, which focuses on the aftermath of Hurricane Katrina and called   "one of the most challenging and unsettling American films of the year[1]" and JACK TAYLOR OF BEVERLY HILLS, a nostalgic and intimate look at the tailor to the stars which Vanity Fair called 'fascinating" to ECHOTONE, a telescopic view into the lives of Austin's vibrant young musicians, a New York Times Critics Pick and one of Paste Magazine's Top Documentaries of 2011.  For those with a dramatic bent, there's ALL MY FRIENDS ARE FUNERAL SINGERS, an Official Selection of Sundance and SXSW and ARTOIS THE GOAT about one man's quest to create the greatest goat cheese the world has even known, which The Austin Chronicle called "charming, slightly surreal, and hilarious".

The 10 DVDs featured in the INDIEPIX MIX 10 collection includes:

ALL MY FRIENDS ARE FUNERAL SINGERS -- This unique, atmospheric fable, an official selection of both Sundance and SXSW 2010, was the avant-garde feature-length debut of Califone's talented front man Tim Rutili, who both wrote and directed.  Rather than rattling old chains, the spirits in ALL MY FRIENDS ARE FUNERAL SINGERS play experimental music in the upstairs bedroom of a psychic adviser's home. The ghosts came with the building, inherited by Zel (Angela Bettis, Girl, Interrupted, TV's "Carrie") from her mystic-minded grandmother, and now they want out in this mind-altering experimental movie which Paste Magazine called, "a little gem of a film...directed with a light, deft touch". (my review is here)


ARTOIS THE GOAT -- Foodies everywhere are sure to savor this "nutty, spry, altogether charming picture about love and artisanal cheese-making[2]" with festival favorite ARTOIS THE GOAT,a comedy invoking the passion of Chocolat, the humor of Amelie and the comedic precision of Wes Anderson.  Delectable and perfectly aged, this surreal comedy from brothers Cliff and Kyle Bogart, follows hapless lab technician Virgil Gurdies' and his epic quest to create nothing less than the greatest goat cheese the world has ever known to reclaim his girlfriend's heart.  Certain to be a feast for nearly all of the senses, the festival favorite captured the Gold Medal Jury Prize Winner at the Park City Film Music Festival for Brian Satterwhite's original score.

CANDYMAN -- It's time to spill the beans in CANDYMAN, a documentary recounting the amazing true story of David Klein, an eccentric candy inventor from LA who came up with the concept of Jelly Belly jellybeans.  These colorful beans became a pop culture phenomenon, revolutionized the candy industry and were personally endorsed by Ronald Reagen. However, David's eccentric personality and peculiar sense of business led him to leave Jelly Belly just as it was about to explode and grow into a billion dollar enterprise. Is there room for eccentric genius in the modern corporate world? The film tells how Klein may have lost his beans, but kept his soul. (my review is here)

THE DEVILLES - The non-fiction debut of director Danish director Nicole Nielsen Horanyi, THE DEVILLES is a verite glimpse into the lives of
burlesque stripper Teri Lee Geary (aka Kitten DeVille) and her punk rock singer husband Shawn Geary who live in a self-imposed time bubble of romance caught somewhere between the 50's and the 80's: Teri looks like Marilyn Monroe and Shawn looks like The Clash's Joe Strummer.  The doc catches up with the couple after 25 years of passion, but suddenly at a time of crisis.  Will their glamorous, consumed life survive? (Here is my review)

ECHOTONE - Internationally known as 'The Live Music Capital of the World,' Austin's music culture has led it to become one of the world's most sought-after destinations. As nearly two dozen high-rises pop up throughout the city amidst economic downfall, how does the working musician get along? This lyrical documentary, called, "an aural symphony of civic dischord with sublime visuals[3]" and  "the best (free) soundtrack we've ever seen[4]", provides a telescopic view into the lives of Austin's vibrant young musicians as they grapple with questions of artistic integrity, commercialism, experimentation, and the future of their beloved city.  Directed by Nathan Christ and photographed by Robert Garza, ECHOTONE is a cultural portrait of the modern American city examined through the lyrics and lens of its creative class. (My review is here)

THE AXE IN THE ATTIC - Focusing on the aftermath of Hurricane Katrina, two filmmakers, drawn together by outrage, take a sixty-day roadtrip from New England to New Orleans. Along the way they meet evacuees and witness the loss, dignity, perseverance, and humor of people who have become exiles in their own country. The breakdown of trust between a government and its citizens, the influence of race, class, and gender - as well as the ethics of documentary filmmaking itself - form the backdrop for this universal story of the search for home, which has gone on to garner stellar reviews and impassioned reaction, including 3 stars from Roger Ebert who called it "shattering". (My review)


FRONTRUNNER -- The setting: Afghanistan's first democratic election ... ever.  In the aftermath of 9/11, America's military might has set the stage. But who will determine the fate of democracy in Afghanistan?  Could it be Dr. Massouda Jalal, an idealistic politician and devoted mother of three who boldly defied the Taliban to offer hope to her war-torn nation?  Find out in the poignant and surprising FRONTRUNNER from Emmy® Award-winning filmmaker Virginia Williams.  (My review)

JACK TAYLOR OF BEVERLY HILLS -- Take a nostalgic and intimate look at an American icon and a dying breed in JACK TAYLOR OF BEVERLY HILLS.  A good suit has many lives, and if a suit could talk it would tell the story of Taylor, who, for more than sixty years dressed the stars, including Cary Grant, Dean Martin, Sid Caesar, Frank Sinatra and even Elvis Presley.  Through candid interviews and precious hours spent in Jack's dynamic presence, the film is both the story of a fashion pioneer and a bittersweet portrayal of old Hollywood, detailing the demise of not only custom tailoring, but of an era. (Here is my review)


SHOOTING STARS[s] -- In 10 years, Johnny Nunez went from sleeping in his car to being the world's most famous hip-hop photographer.  Now on the verge of becoming a celebrity himself, filmmakers Axel Ebermann and Daniel Frei have documented Nunez's incredible journey in SHOOTING STAR[s], a real-life urban fairytale following the prominent Hip Hop celebrity photographer, profiled in The New York Times and described as "hip-hop's Patrick McMullan".  The inspirational documentary portrays both Nunez's glamorous life as he mingles with prominent figures such as Russell Simmons, Al Sharpton, Kanye West, Swizz Beats, Ne-Yo, Kimora Lee and Fabolous, and the remarkable journey of a man who defied poverty and racism, and used his wit, tenacity and faith to pursue his American Dream. (See my review here)

EVERGREEN - A teen-aged girl yearns to reinvent herself and find something she can be thankful for in the face of poverty in EVERGREEN, nominated for the Grand Jury Prize at the 2004 Sundance Film Festival, and marking Enid Zentelis' feature film directorial debut.  Set in the picturesque Pacific Northwest and starring Emmy®-award winning actress Mary Kay Place (Julie & Julia, "Big Love"), Oscar® nominee Bruce Davison (Longtime Companion, X-Men), Cara Seymour (Adaptation, Gangs of New York) and newcomer Abbie Land, the acclaimed festival favorite follows 14 year-old Henrietta, who longs for everything she doesn't have, in a film The Boston Globe called, " an.affecting slice of low-watt indie filmmaking that goes where few American movies bother: below the poverty line."