When Calls The Heart: Heart of the Family DVD Review 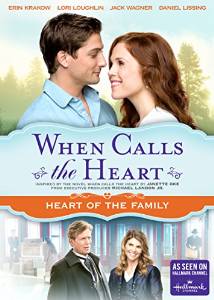 I have become very found of this series When Calls the Heart on the Hallmark Channel,produced by Michael Landon Jr, and based on the novel by Janette Oke

Elizabeth returns to Hope Valley and immediately volunteers to look after a neighbor’s rural homestead… and his two children, an undertaking which proves to be a bigger chore than she’d imagined. But when Jack lends a hand, and they wind up chatting by the fire, all seems right in Hope Valley and the world. Meanwhile, in Hamilton, Bill Avery sets about busting a counterfeiting ring wide open, an endeavor which surprisingly leads him to Hope Valley, where he mysteriously declines Jack’s help. But Bill isn’t the only big-town visitor: Elizabeth is even more surprised to see her former suitor, Charles Kensington, standing right in the middle of her schoolhouse!

Somehow I missed an episode between Trials of the Heart and Heart of the Family. This episode has Elizabeth back in the "new" town of Hope Valley after go home to be with her family while her mother recuperates.


Jack and Elizabeth are still avoiding acting that they are more then they are to each other. What a man though, she would be a fool to not fall for this guy. He cares so much about her that he built her a school. He also sleeps in a barn and takes care of things while Elizabeth helps a single dad take care of his kids while he is away. HOWEVER, Elizabeth's childhood friend has come to town and believes he is the GUY for Elizabeth.

One of our newer characters has a bigger storyline with the introduction of her advice column Ask Mary Rose. However many think it may be too progressive for the people of the town. You've got to love this character. She is a spicy one!

We also have some shadiness going on with the new mayor! He will do anything to control his villagers even if that means breaking the law.

Oh and Bill Avery (Jack Wagner/AKA Frisco Jones) has returned and is definitely not the man we thought him to be AND this time he was followed by his WIFE Nora (Kristina Wagner/AKA Felicia Jones (Sorry I am a huge General Hospital fan and have been for over 38 years).

Clara is back in town and working with Abigail. Mother-in-law and new daughter-in-law have a wonderful new relationship, one that I think will be very important to Abigail. They obviously both need someone to care for and hopefully heal with.

The struggles of the people of Hope Valley bring us back to a time when life was purer, honest, and the problems were based on the time of year, the weather and whether you had a successful crop.

What I love most about this show is how family friendly it is. I never have to change the channel because an inappropriate scene surprised me and the kids are awake. This is a wholesome show that everyone in your family can watch.

Disclaimer: I received a complimentary DVD from Hallmark Channel, Word Films and Edify Media for my honest opinion. No monetary compensation as offered or received.