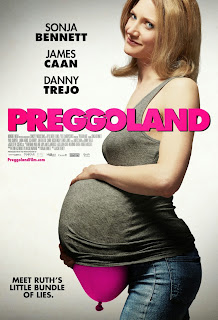 PREGGOLAND is about Ruth (SONJA BENNETT), who at 35 years old hasn’t changed much since high school. She’s still partying in parking lots, working as a cashier in a dingy supermarket, and living in her father’s (JAMES CAAN) basement suite. When she gets hammered at a friend’s baby shower and ruins it with her juvenile antics, her old high school cronies – who are now all married with children – “delicately” suggest she might want to find some friends her own mental age.

But surely accidentally lying about being pregnant herself will solve everything….?


After hitting rock bottom, Ruth finds herself stuck between a rock and a hard place when her lie about being pregnant with twins snowballs out of control. Can she get out of this without losing her job, friends, the respect of her family, and the new love of her life?


This hilarious flick, which also stars DANNY TREJO in an unusually warm n’ fuzzy role, written by Bennet, and directed by Jacob Tierney, will be in select theaters and available for download on iTunes this Friday!