Greatest Hits From The 1900s To Now: True Tales Of The Last Century 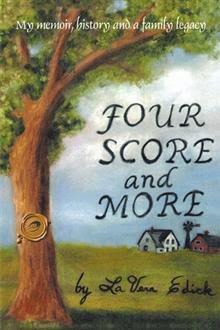 Greatest hits from the 1900s to now: true tales of the last century
Nonagenarian shares firsthand accounts in new book

BISMARCK, N.D. – With sites Ancestry.com making a splash, there’s a renewed interest in understanding and learning where we come from and who our ancestors are.

“Four Score and More” shares a written history of one family through the eyes of just one of its modern descendants. Author LaVera Edick shares the stories of many lifetimes—including her own.

Edick offers memories of the 1937 opening of the Golden Gate Bridge, the 1941 bombing of Pearl Harbor and many other historic events the 90 year old has witnessed.

Edick excels not only in the written word, but also in visual arts: she illustrated the book’s cover and also provided visual illustrations included throughout the book.

“Four Score and More” is a unique American success story, but offers something for anyone who has lived throughout the last century.

Available for purchase at Amazon, Barnes and Noble and Trafford Publishing.

LaVera Edick was born in 1925 and grew up in a Quaker farming community in Nebraska during the Great Depression, the Dust Bowl days and World War II. She now lives in Bismarck, North Dakota, where she enjoys creating art. LaVera is grandmother of 13, great-grandmother of 22 and great-great-grandmother of one. “Four Score and More” is her first book; her second book, “Cat Tales, Kitty Capers and More” is on the way.