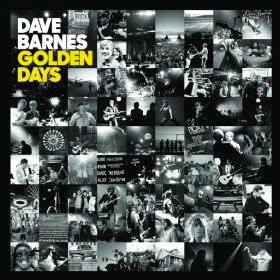 I had never heard of Singer DaveBarnes talented singer-songwriter who is best known for Blake Shelton's cut of his song “God Gave Me You,” which earned him a Grammy and CMA nomination.

Last year he released an album ‘Golden Days' that includes an amazing song, “Good,” which is a song of reflection & what really matters in life - family, friends, loved ones and perfect for the Mother's and Father's Day.


I can hear her laughing in the kitchen
And the sounds of little footsteps on the stairs
I’ve got all I’ll ever need: a wife, a home, a family
And I thank God for all those answered prayers


With several other songwriting cuts as well as nine of his own albums under his belt, Barnes also has an amazing artist career spanning almost 15 years.

After listening to Dave's CD I thought to myself yes it is considered a religious CD because he speaks of God in his lyrics and prayer but it is more about life and spirituality, acceptance and being kind and not giving up while trying to see the good in everything. The good in life!  It is about loving with your whole heart even when the chances of it being reciprocated are slim or unsure.

Twenty Three - Is the male version of Taylor's 22 about a band just living life as a band trying to make it and live their dreams. Like Taylor it is a catchy tune with a nice upbeat tempo and beat.

Loving Los Angeles - is about a guy letting the love of his life leave and go to LA to live her dream. He is sad and lonely but is letting her find out of that is what she wants.


We could have had that good good good easy loving,
That makes the hard times go away.
I tried all I could,
But it isn't really doing me any good.
I'm as low as lonely gets,
And I hear you're loving Los Angeles.

All She Wants - Is a song about a girl hanging on to the one she loves who I am assuming isn't sure he wants to be with her. I would love to know what everyone else thinks. This song actually made me tear up. So any thoughts would be appreciated.


She don't need the angels to keep her company.
When the wind is full of worry and her heart won't let her sleep.
She ain't gonna say it, but that don't make it untrue.
All she wants is you.

Little Civil War is a funky little tune featuring a female singer named Lucie Silvas a British Singer/Songwriter and it is about a couple who love each other and know that when they fight they are going to make up.

And ooh, it's like fireworks, baby, when we get like this.
Ooh, things that make us both crazy are the things that we'd miss.
Ooh, there ain't nobody else I wanna fight with more.
But we both win, when it ends with a kiss,
That's for sure in our little civil war.


Something More is a fast tempo, fun song with an island vibe about being in love and expecting that your life will change but nothing is better than the person you love. You may get hurt, you may lose sleep but it you put the time in and love with your heart you will get those golden years!

Heartbroken Down is a funky, song with a horn in the chorus about someone who dreams that the one they love has left them but they woke up and realize all is well.


I was heartbroken down,
Living with my head hanging to the ground.
There was no way back from the lost I'd found.
Heartbroken down.

Morning come waking up still in love, I've never been so happy.
Baby, please, never leave, I'm incomplete without you.

By Two is musically (I love acoustic guitars) and lyrically one of my favorites songs. The words are beautiful. They kind of words you would want to hear from a man you love. It is about someone in a relationship who loves with his whole heart and can't wait to see what the world has in store for his life as long as it is with the person he loves. They know by being with this person anything is possible as long as they have each other.


Don't wanna fall asleep without you.
I don't want a day without you close.
Our hearts and hands will always be the closest of company.
Best believe, I'll never let you go.

Someday when it's all through, they'll bury me there by you.
I'll be smiling underground.
Gone and heaven bound, Lord, it's true.
Cause I got to do, what I got to do, with you by two.

Can't She Try has a pop beat and feel. It is about a girl who is looking for a chance to find the love of her life and she isn't afraid of getting hurt. Such deep words and feeling with this upbeat pop feel makes it less pathetic and heartbreaking. A slower tempo would have made this a tearful song with hopelessness but the upbeat keeps it positive and possible. I love it! She can do it! Yes she can!

Sharon Sue is about a guy who knows his girl can get anyone but he also knows that he has everything she could possibly need and he isn't sharing!

And all my love in the morning, love in the day.
Love in the evening, what you want, just say.
Anything you're needing is everything I'll do.
Cause I ain't sharing you, Sharon Sue.


Hotel Keys is a beautiful song about someone who is on the road a lot living in hotel after hotel and city after city and how they struggle with that life.


Wheels just keep on rolling.
Another town, another scene.
11 years of running over miles of memories.
What I'd give to go back to when it was still a dream.
When it was more than a pocket of hotel keys.

I give the album as a whole a 4 out of 5. I like the diversity of the style from pop, to country, to funk and acoustic.

Dave Barnes wasn't on my radar but is now. He writes from the heart and his honesty is refreshing and inspiring.

Don't be turned off by the religious category because as a whole this CD isn't religious. Anyone who enjoys music will enjoy this CD. So roll the windows down and drive, lie in bed listening to the rain or get ready to clean but whatever you are doing, download some Dave Barnes and let him accompany you.

Dave Barnes can be found on:


For your chance to win an autographed CD enter below

Disclaimer: I received a complimentary CD for my honest opinion. No monetary compensation was offered or received.