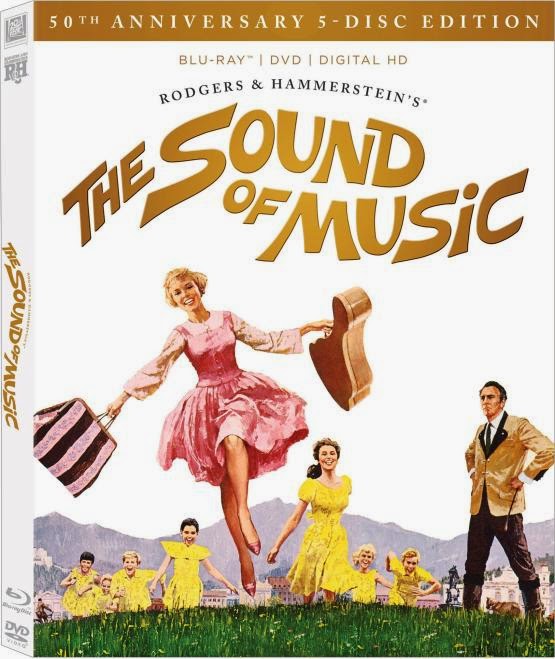 Special New Documentary
“The Sound of a City: Julie Andrews Returns to Salzburg”

LOS ANGELES, CA (January 20, 2015) – Twentieth Century Fox proudly honors the 50th Anniversary of the 1965 box office smash and five-time Academy Award®-winning The Sound of Music with an unprecedented year-long, company-wide celebration highlighted by theatrical and home entertainment releases, and a slate of cross-company and promotional partnerships that will bring one of the world’s most ‘favorite things’ to millions around the globe. The unparalleled golden anniversary of the film’s premiere will launch March 2 in the United Kingdom and March 10 in the United States with the release of the 5-disc Ultimate Collector's Edition 50th Anniversary Blu-ray™/DVD/Digital HD. Beautifully restored, the 5-disc 50th Anniversary Blu-ray features over 13 hours of bonus content highlighted by the all-new documentary “The Sound of a City: Julie Andrews Returns to Salzburg,” detailing Andrews' recent return to the magical city where she filmed her iconic role, Maria, half a century ago!

The celebration will continue on March 26 with Turner Classic Movies (TCM) paying tribute to the film’s legendary stars, Julie Andrews and Christopher Plummer, with an opening night screening of the movie at the sixth annual TCM Classic Film Festival (which runs from March 26-29). Famed film historian Robert Osborne will introduce the brilliantly restored film at the opening-night gala and moderate a Q&A session with Andrews and Plummer.

The treasured film will once again proudly shine on the big screen in commemoration of this special anniversary. Through a Fox partnership with Fathom Events and Turner Classic Movies, a beautifully restored version of the film will be shown for two days only, April 19 and 22, in over 500 theaters across the U.S. (www.FathomEvents.com).

"The Sound of Music is one of the most beloved movies of all time and has become part of the cultural fabric of generations around the world,” said Mary Daily, President of Worldwide Marketing and Chief Marketing Officer, Twentieth Century Fox Home Entertainment. "From its very beginning, The Sound of Music has brought immense joy to millions. The 50th anniversary offers us the opportunity to honor this very special film – the music, scenes and moments that continue to keep it as relevant today as when it first premiered."

A phenomenon upon its debut in 1965, The Sound of Music’s spectacular ‘roadshow’ release spanned over two years in theaters, inspiring audiences on the way to winning the “Best Picture” Oscar, as well as millions of fans spanning multiple generations. A testament to its enduring popularity, this timeless classic enjoys nearly 2.5 million Facebook followers (50% 34 years old or younger).

The Sound of Music 50th Anniversary celebration will feature a global partnership with Princess Cruises, also celebrating its Golden Anniversary in 2015. The acclaimed line will screen the movie on board multiple sailings throughout the year along with themed events, sing-a-long experiences and more. Beginning in March, fans can enter to win a Princess cruise for two plus a $500 Princess Cruises gift card each month through the end of the year with a total of nine chances to win.

The emotional all-new The Sound of Music documentary, “The Sound of a City: Julie Andrews Returns to Salzburg,” blends personal memories with fascinating history, as Ms. Andrews returns to key sites in the story of the von Trapps, including Nonnberg Abbey, Mondsee Abbey and the “Do-Re-Mi” steps at Mirabell Gardens. With the Blu-ray, fans can further explore the making of the biggest live-action musical of all time with numerous featurettes highlighting the movie, music, real-life von Trapp family and more. The Ultimate Collector’s Edition Blu-ray will feature an exclusive, 50th anniversary soundtrack from Legacy Recordings/Sony Music, which includes eight international bonus tracks never-before released in the U.S. Legacy Recordings/Sony Music will also release, for the first time ever, a special 50th Anniversary soundtrack featuring the full film score.

In addition to the new Special Edition Blu-ray and CD soundtrack, no less than four new books are being published in 2015 to coincide with the anniversary, focusing on the film. They are: “The Sound of Music Companion – 50th Anniversary Edition” (Laurence Maslon, Pavilion/Rizzoli); “The Sound of Music Story” (Tom Santopietro, St. Martin's Press); “Sound of Music FAQ” (Barry Monush, Applause Books); and “The Sound of Music: BFI Film Classics” (Caryl Flinn, BFI).

Before it was an Academy Award®-winning film, The Sound of Music was a Tony Award®-winning Broadway musical, and productions of the stage musical continue to be presented all over the world. 2015 will see the launch of a major new stage tour across the U.S. and Canada, directed by Tony Award-winner Jack O'Brien, simultaneous with another stage production touring the U.K.

Winner of five Academy Awards®*, including “Best Picture” and “Best Director,” Robert Wise’s inspiring adaptation of Rodgers & Hammerstein’s The Sound of Music is the most popular musical of all time and one of the genre's biggest box office hits. Starring Oscar** winners Julie Andrews and Christopher Plummer, the film follows Maria (Andrews), the warm-hearted young woman who brings joy and music to Captain von Trapp (Plummer) and his seven children. This cinematic treasure is filled with unforgettable songs, including “Do-Re-Mi,” “My Favorite Things” and “The Sound of Music.”