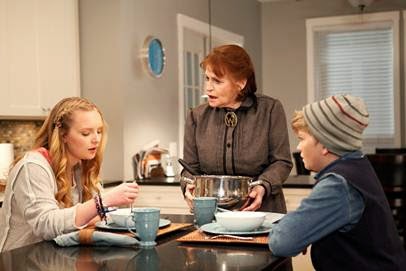 When Nate's big sister Molly bullies him around, he imagines vindictive punishments for her, administered by the stern disciplinarian Mrs. Worthington (Kidder). But when the winds change, Mrs. Worthington decides that Molly isn't the only one who needs punishing.

“R.L. Stine’s The Haunting Hour: The Series,” winner of the 2013 and 2014 Daytime Emmy® Award for Outstanding Children’s Series, is produced by Front Street Pictures in association with The Hatchery, LLC. with Dan Angel (“Goosebumps”), Billy Brown (“X-Files”), Harvey Kahn (“We Don’t Live Here Anymore”) and Kim Arnott (“The Debaters”) serving as executive producers.

Margot Kidder is an acclaimed film actress best known for playing Lois Lane in the “Superman” movies of the 1970s and 1980s. She has also starred in the films “The Amityville Horror,” “Willie and Phil,” “Some Kind of Hero” and “The Great Waldo Pepper.” Kidder recently guest starred on the television series “Smallville” and “Brothers and Sisters.”


About Discovery Family Channel
Discovery Family Channel is a bold, 24-hour entertainment destination that brings the entire family together to share a sense of wonder, amazement and fun about the world.  Currently available in nearly 70 million homes in the U.S., the network is a joint venture between Discovery Communications and Hasbro, Inc. and showcases world-class kids programming during the day and entertainment that the entire family can watch together at night.