We are completely obsessed with Indina these days. My daughter can't stop singing Let It Go.
MASTERWORKS BROADWAY RELEASES
THE ORIGINAL BROADWAY CAST RECORDING OF 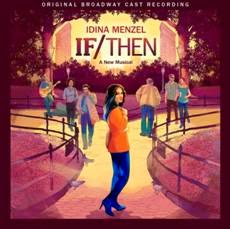 “Tom Kitt and Brian Yorkey’s score is invested with melodic urgency, bringing you to tears or breathlessness.” -Washington Post

Idina Menzel returns to Broadway for the first time since winning the Tony Award for Wicked in If/Then, an original Broadway musical which reunites Tom Kitt (music), Brian Yorkey (book and lyrics), and Michael Greif (director), the creative team behind the Pulitzer Prize and Tony Award-winning musical, Next to Normal. If/Then is being produced by David Stone, who produced both Wicked and Next to Normal.

If/Then is an original new musical that follows Elizabeth as she rebuilds her life in New York, a city of infinite possibilities.  By the Pulitzer and Tony Award-winning creators of Next to Normal, this contemporary musical is set where choice and chance collide.  In one moment, Elizabeth will lead parallel lives.  This is the story of both.