Hello Dear Readers, Spring is coming and I know we are so ready this year. Help the little ones get ready for Spring with Tickety Toc's newest DVD called Spring Chicks Time and some Joy Ice Cream Cones. I cannot wait for Ice Cream Weather. 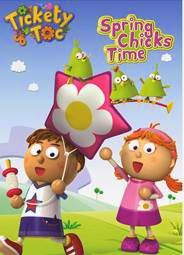 January 8, 2014 – Young viewers and their families all across the country will chirp with laughter as they embark on six engaging spring-themed escapades in “Spring Chicks Time,” the newest title in the popular Tickety Toc DVD series. All the high-flying fun from the hit Nick Jr.® TV series springs to life this Easter in the  all-new release, “Spring Chicks Time,” available on DVD, Digital and Video on Demand, March 25, 2014 from Anchor Bay Entertainment.
Synopsis:
In “Spring Chicks Time” ($14.98), the adorable duo, Tommy and Tallulah, celebrate the season with a town picnic, a nature hike and a kite-flying contest! When the mischievous Spring Chicks fly off in one of the kites, the town must save them just in the nick of chime time! In these fair-weather and fun-packed episodes, the Tickety Town team, along with preschool viewers, will learn the importance of teamwork, community and social responsibility.

To help celebrate the release of “Spring Chicks Time,” Anchor Bay has scooped-up an exciting national cross-promotion with Joy Cone. From April 1 through December 31, for $2.50 shipping & handling, consumers who purchase a Joy Cone product and any Tickety Toc DVD can receive two free Tickety Toc books from Scholastic. Color box art from the “Spring Chicks Time” DVD will be featured on 1 million boxes of Joy Cone product as part of the “tick tocktastic” promotion.

Tickety Toc follows the everyday adventures of 6-year-old twins, Tommy and Tallulah. Traveling through the special Tickety Toc clock, where the twins live, audiences enter a CGI world of eclectic characters and tag along on exciting escapades filled with slapstick surprises. Tommy and Tallulah’s strong “can do” spirit often produces an unanticipated outcome, but their individual approach to sticky situations and joint resourcefulness always shine through and save the day! Through the twins’ madcap adventures, Tickety Toc explores teamwork, social responsibility and problem solving – important concepts for preschoolers as they learn and grow. Tickety Toc has quickly become the #1 afternoon show on Nick Jr. (Nielsen) and has been picked up for a second season.

About Zodiak Kids
Zodiak Kids is the global independent leader in kids’ entertainment, combining Zodiak Media’s dedicated kids production companies, consumer products and sales division. Zodiak Kids encompasses prominent production companies Marathon Media and Tele Images Productions (France) and The Foundation (UK). Sales for Zodiak kids are handled by a dedicated team within Zodiak Rights, one of the leading international distributors in the industry.  All aspects of licensing are handled by a dedicated division with highly experienced teams based in London and Paris (Zodiak Kids CP London and Zodiak Kids CP Paris). Zodiak Kids boasts one of the largest, high-quality kids catalogues in the world, which includes Totally Spies!, the international hit animation series;  Tickety Toc, the new animated series; Waybuloo, the CBeebies pre-school hit; Redakai, a brand new series on Cartoon Network US; Mister Maker, the ultimate arts and craft show; Gormiti, based on the extraordinarily successful figurine range that sold over 100 million pieces; Street Football, one of the top rated animated shows in France and Italy and the newly launched The Ranch. www.zodiakkids.com


Disclaimer: No monetary compensation was offered to host this giveaway.