Anjelica Huston: On Smash, Growing Up, and Finding Love 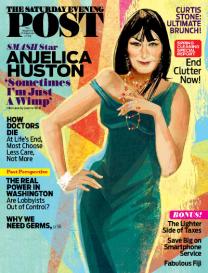 Indianapolis (Feb. 26, 2013)— Born of Hollywood royalty, longtime grist for the tabloid mill, and no stranger to tragedy, at age 61, Oscar-winner Anjelica Huston has found a new inner confidence. Following the sudden death of her husband four years ago, Huston was looking for something to fill the void in her life which she found in NBC’s Smash—her first venture into series television.

In the March/April issue (on newsstands now), Huston opens up to The Saturday Evening Post contributor Jeanne Wolf about her career as “a great observer,” citing that she never “fit in” or had any single type of character that she preferred to play. Outside of the set of Smash, Huston can be found looking for good times – opting to skip the drama of her earlier years – and working on her upcoming memoir. For more information, visit
www.saturdayeveningpost.com/anjelica-huston.

On how Anjelica relates to her Smash character Eileen: “I would like to be as scrappy as Eileen. I can certainly wrap my brain around her scrappiness. But sometimes I’m a wimp, and other days I think I can conquer the world. I wish I could plan it out a bit better.”

On her steamy romantic scenes in Smash: “It certainly livens things up—particularly at my age. I remember at the very outset, two years ago, I said to the producers, ‘Please, give me a love interest.’ I think it’s important to see strong women who also have a very vulnerable side and who are allowed to have a sexy side.”

On getting cast as stern women like Eileen in Smash: “Eileen does have a good sense of humor. But it’s true, they like me to be these slightly sinister characters. It’s good to play against type, I guess.”

On her on-off relationship with Jack Nicholson whom she dated for 16 years: “Jack is someone I’ve adored in my life and will continue to love forever. I don’t take him lightly. As it happens, we had a really lovely conversation on the phone yesterday—a conversation that started off a little bumpy and wound up just completely wonderful. That’s a real relationship. Real relationships have continuity, and Jack and I have a deep abiding love and affection for each other. I’m proud that we’ve gotten through some very tough times together.”

On life after the death of her husband four years ago: “It’s funny. When I was getting ready to go out the other night I thought, there’s absolutely nobody in my life to tell me how I should look, how I should act, or what I should say. In fact, I doubt that there’s anyone who cares very much one way or the other what I do!  And in a way, that was very liberating.”

On finding the next Mr. Right: “It would have to be the right one. Someone who it would have sense to have a love with. Someone who wanted to share that. I can’t say I’m looking for it. I don’t think I’ve ever really looked for it. I’ve never been one of those women who said, ‘Fix me up on a date.’ I always just feel like if the time is right, it’ll come to you. I’ve worked with horses all my life and there’s something that every person who’s ever worked with a horse knows. You can go into a field and try to catch a horse and chase your horse all over the place and you’ll never get your hands on it. But if you go into a field and sit down on the grass, whoa! Probably within 5 minutes that horse will come to you. I think that’s how it is with people too.”

On writing her memoir: “I’m kind of in the midst of it, and it’s daunting, but on the other hand, it feels quite cathartic. Since I’m in the process, it’s a bit hard to talk about. I remember quite a lot, I have to say. Sometimes I wish I remembered a bit less.”

On growing up: “The older I get, the more I look for a good time. I remember when I was in my 20s and 30s, I was always in some fight with a boyfriend or involved in some drama, something to feel bad about. I feel so the opposite of that now. I just like to have a good time, smile, and be with my friends. You know, tell a story, have a drink. I’m certainly not looking for angst.”

On what she’s learned over the years: “You recognize certain patterns in yourself and other people, and you learn what you’re good at and what you’re not so good at. Hopefully I’ve made a little progress over the years. I’m very Cancerian by nature, crablike, and I don’t like a lot of big changes in my life. I’m happy when I’m on the ride. It’s just thinking about getting on the plane that I don’t like.”

About The Saturday Evening Post: For nearly 300 years, The Saturday Evening Post has chronicled American history in the making—reflecting the distinctive characteristics and values that define the American way. Today’s Post continues the grand tradition of providing art, entertainment and information in a stimulating mix of idea-driven features, cutting-edge health and medical trends—plus fiction, humor, and laugh-out-loud cartoons. A key feature is the Post Perspective, which brings historical context to current issues and hot topics such as health care, religious freedom, education, and more. Tracing its roots to Benjamin Franklin, The Saturday Evening Post mirrors cherished American ideals and values, most memorably illustrated by its iconic cover artist Norman Rockwell. The Post is also known for publishing such literary greats as Ray Bradbury, Agatha Christie, William Faulkner, F. Scott Fitzgerald, Edgar Allan Poe, and Kurt Vonnegut, and continues to seek out and discover emerging writers of the 21st century. Headquartered in Indianapolis, the Post is a publication of the nonprofit Saturday Evening Post Society, which also publishes the award-winning youth magazines Turtle, Humpty Dumpty, and Jack and Jill.