Stop The Tantrums With A Baby First I Can Sign Giveaway 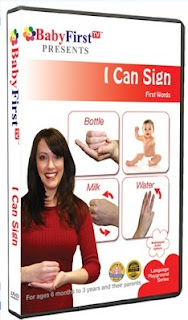 As a mom who had the king of tantrums living with her for over 4 years I can tell you that I wish I had learned more about this by my son's speech therapists when he was younger. Handsome had a speech delay which contributed to a social delay afterwards. He would throw tantrums like no bodies business because he could not get his point across easily.  We know a little bit of sign language now but if we had all learned the very basic signs in the beginning it would have helped us all.

BabyFirst presents a parents saving grace for frustrated babies and parents with a  DVD, “I Can Sign".  This DVD will help parents teach their babies how to use sign language. BabyFirst is the #1 cable and satellite destination targeting babies, toddlers and moms.

“I Can Sign” is just one of the many educational shows you’ll find on BabyFirst – and it’s certainly a helpful one! A huge benefit of using sign language with a baby is that it gives the baby the ability to express important needs. Learning to verbalize is much more difficult, as it involves learning where to place the tongue, forming the lips correctly and controlling the vocal chords. When a baby can express needs by signing, frustration is alleviated which results in fewer tantrums and less crying!
My heart goes out to my little frustrated baby who is now almost 10 but when I think about how upsetting it must have been for him to not be able to communicate effectively how alone he must have felt at times.  I was very aware than and even more aware now of how this played a pivotal part in his personality now.

More About BabyFirst:
Since its launch in 2006, BabyFirst has steadily grown to become the country’s largest television vehicle targeting babies, toddlers and their moms.  The fastest-growing channel in 2012, BabyFirst now reaches 35 million homes as a new programming staple on Comcast systems nationwide, in addition to serving as an important part of the family tiers for both DIRECTV and Dish Network. The channel is projected to exceed 50 million homes by mid-2013. For more information on the channel, visit www.babyfirsttv.com.

BabyFirst would love to offer one of my readers the chance to win a BabyFirst I Can Sign DVD.