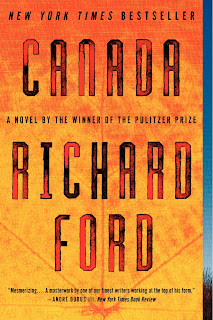 CANADA
A novel by the winner of the Pulitzer Prize

CANADA, the latest novel from Pulitzer Prize winner Richard Ford, is a powerful, suspenseful story of misadventure and malevolence that explores large themes of identity, culpability, and the ineluctable bonds that tie us to the past. Ford’s first book in nearly six years, it is a compulsively-readable, uncompromising tale in which a host of transgressions—including bank robbery, kidnapping, abandonment and murder—shape the life of its protagonist: a fifteen-year-old boy compelled to forge his own way when his insular family implodes. With prose at once spare and luminous, Ford renders the desolate beauty of Montana and Saskatchewan as only a great writer can, providing the perfect backdrop for this spellbinding look at the dark side of the American experience.
The year is 1960. Dell Parsons and his twin sister, Berner, live a suspended life in Great Falls, Montana, the latest stop of a peripatetic childhood. Their parents are ill-suited, forced to marry young because of the pregnancy. Bev, their father, is a gregarious Southerner, a World War II combat veteran who retired young from the Air Force and since has struggled to find suitable means of employment. Their mother, Neeva, is a woman of small presence, the daughter of Jewish immigrants, who has cast aside her aspirations to be an academic and poet for the disappointing reality of marriage and motherhood. Dell and Berner themselves have no friends to speak of. As Dell recounts the ill-fated events that unfold for this defective family, Ford takes readers deep into the soul of one of his finest-wrought characters, an unforgettable young man.
When one of Bev’s illegal scams with some local Indians goes wrong, he and Neeva make the foolhardy decision to rob a bank. Their subsequent arrest and imprisonment destroys the fragile fabric of the family, and leaves Dell and Berner on their own. In order to avoid becoming wards of the state, Berner runs away, and Dell is secreted across the border into Canada by a friend of his mother. There, far north in Saskatchewan, he is taken in and given work by Arthur Remlinger, a charming American with a romanticized, furtive past. In the vast isolation of his new life, however, Dell will witness violent wrongdoings that far outstrip his parents’ petty crime.
As Dell reluctantly navigates a life not of his own making, he will contemplate its larger meaning, and come to realize that while the significance of events can weigh heavy, their importance is not always what we choose to make of them. A story of boundaries and borders, of particular place and collective experience, CANADA is a masterful work of the imagination from “one of the finest curators of the great American living museum” (Washington Post Book World), rooted in the landscape and grounded in the human soul.

ABOUT THE AUTHOR
Richard Ford is the author of the Bascombe novels, which include The Sportswriter and its sequels, Independence Day—the first novel to win the Pulitzer Prize and the PEN/Faulkner Award—and The Lay of the Land, as well as the short story collections Rock Springs and A Multitude of Sins, which contain many widely anthologized stories. He lives in East Boothbay, Maine, with his wife, Kristina Ford.