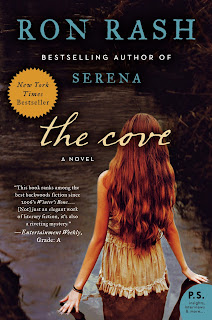 “Mr. Rash’s writing is so richly atmospheric…as he has demonstrated elsewhere, notably in the dazzling 2008 novel Serena, [Rash] can make words take wing…A breathless sequence of events lead the book to its devastating final sentence. And that sentence affirms Mr. Rash’s reputation for writerly miracles when it manages an uncanny feat: fusing the cove, the Vaterland, the parakeets and the lovebirds into one perfectly wrenching last thought.”
— Janet Maslin, The New York Times

“A gently beautiful new novel…Rash, a native of Appalachia, has written a southern tragedy, with a self-consciously Shakespearean structure and economy…. [A] powerful novel, with some of the mysterious moral weight of Carson McCullers, along with a musical voice that belongs to Rash alone.”
— USA Today
“Set during World War One, The Cove is a novel that speaks intimately to today’s politics. Beautifully written, tough, raw, uncompromising, entirely new. Ron Rash is a writer’s writer who writes for others.”
— Colum McCann
“Ron Rash is a writer of both the darkly beautiful and the sadly true; his new novel, The Cove, solidifies his reputation as one of our very finest novelists.”
— Richard Russo, Pulitzer Prize-winning author of Empire Falls
“This book ranks among the best backwoods fiction since 2006’s Winter’s Bone.... [A] gripping novel…[not] just an elegant work of literary fiction, written in a voice that’s hauntingly simple and Southern; it’s also a riveting mystery.”
— Entertainment Weekly, Grade: A
“In Rash’s skilled hands, even farm chores take on a meditative beauty.”
— People
“The gripping plot, gothic atmosphere, and striking descriptions, in particular of the dismal cove, make this a top-notch story of an unusual place and its fated and fearful denizens.”
— Publishers Weekly (starred review), Pick of the Week
“Rash develops his story masterfully; the large cast of characters is superbly realized, as is the xenophobia that accompanies the war, and Rash brings the various narrative threads together at the conclusion of the novel with formidable strength and pathos.”
— Library Journal (starred review)
“[B]eautifully crafted…In [The Cove’s] story, we hear the unique voice of a region made all the more poignant for how few will ever hear it exactly this way again.”
— Atlanta Journal-Constitution
“Rash masterfully poises suspense elements and gives full reign to other strengths: language, awe, symbolism, cast of characters and mountain knowledge…. It’s a book you could read again to savor the writing. Rash has found a subject that compellingly represents his vision—beauty shadowed by foreboding; and he’s made it symphonic.”
— Asheville Citizen-Times
“Rash effortlessly summons the rugged Appalachian landscape as well as the small-mindedness and xenophobia of a country in the grip of patriotic fervor, drawing striking parallels to the heated political rhetoric of today. A powerful novel that skillfully overlays its tragic love story with pointed social commentary.”
— Booklist (starred review)

THE COVE (Publication Date: November 6, 2012; $14.99), the new novel from New York Times bestselling author Ron Rash, is a haunting evocation of America’s past, set in the Appalachian Hill country that this award-winning writer has so effectively claimed as his literary terrain. Set in 1918 during the last months of the Great War, this deeply affecting work of fiction is a story of love doomed by society’s ignorance, misplaced nationalism, and the vagaries of history.

In an isolated cove in the dark North Carolina hills, Laurel Shelton lives on the family’s hardscrabble farm with her brother, Hank. Her natural beauty marred by a purple birthmark, Laurel has been shunned since she was a child by the local population, who believes she bears the mark of a curse. Indeed, the cove itself is believed to be cursed, and family events would bear out that superstition. Laurel’s mother died a young and ugly death, and her father, incapacitated by a heart condition, lived as an invalid for decades, forcing Laurel and Hank to run the farm from the time they were children. Hank, too, seems to have fallen prey to the family misfortune, and has returned from the war having lost a hand in battle.

One day, Laurel hears beautiful music in the woods, and she spies a disheveled drifter playing a flute by the creek. Checking back each day, she finds him still there in his sequestered place, then one day discovers him felled by an attack of bees. Dragging him back to the cabin, Laurel nurses him back to health. Hank’s reluctance in having a stranger in the house is assuaged when the young man, Walter, proves a worthwhile hand around the farm. All they know about Walter, who is mute and cannot read, is that he is a musician who wishes to return to New York City.

What they don’t know about Walter is that he is a German national who has escaped from a nearby camp, where he was being held as a wartime detainee after working as a musician on a German cruise ship. Laurel quickly falls for Walter, and Hank, who has marriage plans of his own and would love to see his outcast sister settled, encourages the match. Walter is set upon returning to New York, but when forced to seek refuge again in the cove, his silent reappearance is interpreted as love. And it does blossom into love. But Laurel’s happiness is short-lived as she uncovers the truth about Walter—and must decide what course to take. Meanwhile, a pompous patriotic army recruiter named Chauncey Feith stokes fear and outrage throughout the county by rallying the citizenry against anyone with even the most tenuous ties to the enemy.

As this lyrical novel draws toward its heartbreaking conclusion, Rash once again proves a master at delineating both the complexities of the human heart and the eloquent power of place. “Ron Rash is a writer of both the darkly beautiful and the sadly true,” says Richard Russo. “THE COVE solidifies his reputation as one of our very finest novelists.”

About the Author
Ron Rash, who has been called the “Bard of Appalachia,” is the author of the 2009 PEN/Faulkner Finalist and New York Times bestselling novel, Serena, in addition to three other prize-winning novels, One Foot in Eden, Saints at the River, and The World Made Straight; three collections of poems; and four collections of stories, among them Burning Bright, which won the 2010 Frank O’Connor International Short Story Award, and Chemistry and Other Stories, which was a finalist for the 2007 PEN/Faulkner Award. Twice the recipient of the O. Henry Prize, he teaches at Western Carolina University.


Disclaimer: I received no monetary compensation to host this giveaway.