There Is Still Time To Pick Up October's Good Housekeeping Mag 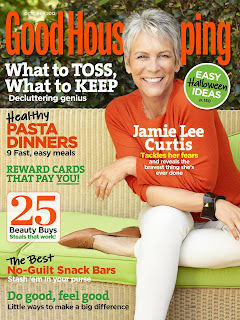 Jamie Lee Curtis graces Good Housekeeping’s October cover, and inside, she tackles her fears, reveals the bravest thing she’s ever done, and opens up about marriage, family and parenting.

For the cover story, Curtis tacked one of her biggest fears: running a race. "I know that seems crazy for many people, but a 5K was a big deal for me," she confesses.
Curtis invited Good Housekeeping to track her training, to watch the big race — and to chat with her about the thrill of trying something new...even something she knew she might not have a knack for.


"As I focused on how we encourage kids to take risks, I realized that as adults, we don't do anything new," she says.

"We eat the same food. Sleep with our husbands the same way. We don't try new things, yet we want our children to do that every day of their lives. Trying something new and challenging yourself is what life is all about," says Curtis.

GH: Is there anything at which you’ve ever failed?

“Failure sounds like there's an end to it. I struggled with addiction, and for a long time I felt like I was failing. I feel like a failure as a mother a lot, because despite my best efforts, I have replicated parts of how I was parented [that I didn't want to]. Even though I vowed not to and felt like I was doing it so differently, in many ways I repeated some of the same problems.”

On the bravest thing she’s ever done: “Getting sober [13 years ago] was the single bravest thing I've ever done and will ever do in my life. Not [running] a 5K — facing an addiction. Being courageous enough to acknowledge it privately with my family and friends. Working really hard at solidifying it, getting support around it, and being healthy. And then talking about it publicly. That is the single greatest accomplishment of my life.”

To read the full interview, go to www.goodhousekeeping.com/jamieleecurtis and pick up Good Housekeeping’s October issue, on newsstands September  11.