A New Chuggington DVD Has Pulled Into The Station 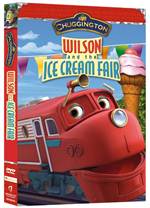 Preschoolers Coast-to-Coast to Get ‘on Track’ for Cool Learning Adventures With Latest ‘Chuggington’ Release from Anchor Bay Entertainment – May 15, 2012

Families nationwide will “scream” for joy when “Wilson And The Ice Cream Fair,” the newest DVD in the award-winning hit “Chuggington™” DVD series from Anchor Bay Entertainment, pulls out of the roundhouse and into retail nationwide, May 15, 2012.  The charming new compilation for preschoolers and families is set to satisfy everyone’s appetite for fun and adventure with adorable, age-appropriate escapades to engage and enchant young viewers.
“‘Wilson And The Ice Cream Fair’ is an irresistible new title filled with positive messages for preschoolers and we’re very excited to give fans the opportunity to enjoy this delightful collection of favorite ‘Chuggington’ episodes – just in time to celebrate the start of summer,” said Erin Carter, Executive Director of Brand Marketing, Anchor Bay Entertainment.

The all-new episodic collection stars brave trainee Wilson, who takes to the rails with lots to do: he must make a special delivery to the ice cream fair, help Frostini create a new flavor for the mayor’s banquet and, somehow, help prevent a massive ice cream meltdown on the hottest day of the year!  The non-stop fun continues when Wilson and friends Brewster and Koko visit the Chuggington ice cream factory, assist with a brave rescue at the Safari Park and embark on an exciting journey to the ice caves.  Alongside helpful chuggers like Old Puffer Pete, and Mtambo, the young trainees – both on screen and at home! – discover important lessons about responsibility, cooperation, paying attention, overcoming fear and more!

And to “sweeten the deal,” two new promotional campaigns set to celebrate the release of “Wilson And The Ice Cream Fair” are sure to be the “cherry on top” for “Chuggington” fans!   Starting in May 2012, LUIGI’S® Real Italian Ice packages will feature a coupon for $2 off on the purchase price of the new title or any other “Chuggington” DVD.  In addition, consumers who purchase a “Chuggington” DVD and any Joy Cone brand 42 count Mini-Cups or 18 count Color Cups from May 1 to October 30, 2012, will be entitled to receive a FREE Frostini die-cast train from TOMY (shipping and handling charges apply).

“Chuggington” has quickly become a global sensation since its debut in September 2008 in the U.K.  The show has been licensed to more than 175 territories worldwide and has established ratings records in several key international markets, including the U.K., Germany, France and Australia.  The series made its stateside debut in January 2010.  In September, Disney Junior acquired all U.S. television rights to the property for Season Three.  Disney Channel is currently available on basic cable in more than 99 million U.S. homes.

About “Chuggington™”
“Chuggington” is a CGI-animated series as well as a fully-immersive interactive website.  The series follows the adventures of Wilson, Brewster and Koko, trainee engines, each with their own unique personality and learning style.  The series is set in a world much like our own with cities, villages and diverse cultures and geography.  Entertainment and enjoyment are at the heart of “Chuggington,” but embedded within each story are important educational and developmental messages centered on learning and social-emotional development.  The property was conceived to seamlessly integrate television, books and interactive.  Further information is available at www.chuggington.com.