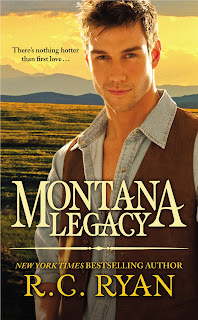 Thanks to Hachette Book Group I was able to read Montana Legacy by R.C Ryan
Book Description from Ruth Ryan Langan's site
There’s nothing hotter than first love . . .
They’re the last of the McCord men . . . three rugged, restless cousins. They will inherit their family’s vast Montana rangelands — only if they seek the glittering treasure buried somewhere on the McCord land. But what these sexy cowboys will never see coming is . . . the women who can tame their wild hearts.
She was the one person who shook Jesse McCord’s quiet determination. She was the only one he ever let in, body and soul. Then suddenly Amy Parrish left without warning — or a word — and the oldest McCord cousin devoted his life to the family ranch. Now Amy is back, caring for her ailing father and offering Jesse help in finding the legendary McCord gold. With luck, his pride will keep him safe from her irresistible charms — and his own unexpected desire . . .
Amy isn’t about to give Jesse a second chance. She’s keeping her assistance strictly business, even if the hungry look in Jesse’s eyes is getting harder and harder to resist. But under the wide prairie skies an unseen enemy is fast closing in, threatening Amy and Jesse’s very lives and the promise of their Montana Legacy.
In A Nutshell: This book about Jesse and his grandfather's last wish was so well written. This was my first R.C. book even though she is a New York Times Bestselling Author with a massive portfolio of literature. Sad but true. Knowing this is part of a series makes me happy to know I won't be have to say goodbye to the McCord's just yet.  The dialogue moves, the setting is beautiful, the characters are colorful and believable, even the secondary characters contribute to a well rounded story. Montana Legacy has everything; action, mystery, suspence and obviously romance. I mean come on, look at that face on the cover.
What I Can Tell You: I am excited to read the second book in the series. I prayed for Amy and Jesse to get back together and loved the journey back to each other. Grandfather Coot, is an interesting character, I would love to have a book dedicated to him and the beginning of this story.
What I Can't Tell You: Will the cousins find the gold that Coot spent his life searching for? Will the be able to piece together the map that will show them they way? Will each cousin find love in the next batch of books?
A big congratulations to Ruth. Montana Legacy has been picked as a June Red Hot Read by Cosmo.
While over at R.C.'s website today, (Ruth Ryan Langan) and she mentioned the blog tour for Montana Legacy to which I am part of. I was mentioned on Ruth's site. Crazy!
BTW...if you think this cover is hot, check out the others in the series...yummy. 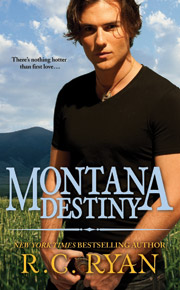 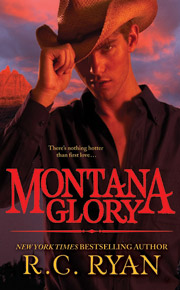 1. The names of all three cousins in this series are famous Western names that I've always loved:  Jesse (James), Wyatt (Earp), and Zane (Grey).

2. There really was a gold strike in 1862 Montana at Grasshopper Creek.  I doubt the nuggets were as big as a man's fist or thumb, but why not dream big?  I love the idea of a treasure lost for a century or more, leading a family into the treasure hunt.
3. In Montana Legacy, part of the fun of reading is that Jesse McCord and Amy Parrish were childhood sweethearts, separated by circumstances.  I think everybody can recall their first big love.  A few very lucky people actually reconnect with that first love and make it work.  Oh, I'm one of them.  Very happily married to the guy I met in first grade.

4. Montana is one of my favorite locations in which to set a series because it has such an ever-changing landscape.  In that single state, you can find plains, hills, mountains, waterfalls, and four distinct seasons, each of which is simply more spectacular than the last, and I purposefully tried to use all of them in this series.
5. I'm not certain this story could work anywhere else but in the rough, rugged west.  Though Jesse tries to be politically correct, there's just something in his genes that has him breaking a lot of rules.  I find readers are much more willing to give a pass to a cowboy.  Don't you agree?  But maybe I'm prejudiced, since Jesse was inspired by my husband—a blunt, plain-spoken rule-breaker.  A warrior who would risk his life for the people he loves.  And for all his rough edges, he's the most loving, tender-hearted man I know.
Thanks to Hachette Book Group, I have 5 copies to give away to 5 lucky readers. So, enter the form below and find out why Cosmopolitan (magazine) has selected Montana Legacy as a June Red Hot Read.
To Enter:  Leave me a comment telling me which McCord CowboyCover you this is the hottest by Midnight, April 3, 2010
US & Canada
For Extra Entries:
*Blog about this, and leave me the link for (3 extra entries) (each entry must be separate)
*Subscribe to my newsletter/email (3 entries) (each entry must be separate)
*Follow my blog (2 entries) (each entry must be separate)
*Subscribe to Chotskies

*Enter another giveaway on my blog and let me know which one.
*Comment on a non-giveaway post and tell me which one.
*Tweet this giveaway and leave your link
*Become a fan of Maria's Space on Facebook

Do not leave entries in the comment section, those are
for comments about the post only.
Disclaimer: I received a copy to review and 5 to giveaway, courtesy of Hachette Book Group. Hachette Book Group is also mailing out the copies to the winners.